Farmers in the Great Plains change their practices which changes their local climate!

Can our farming practices change the local climate, and if so, how?

This 2018 article by Ellen Stuart-Haëntjens in Massive Science summarizes how the practice of summer fallowing in dryland small grain cropping systems affects local rainfall and temperatures:

Environmental scientists Tobias Gerken and Paul Stoy, and PhD student Gabriel Bromley, all from Montana State University, recently published a paper in the Journal of Hydrometeorology that linked the increase in summer planting to a heightened probability of a certain type of rainfall, called convective precipitation, that forms when thermal energy lifts moisture to a cold part of the atmosphere.
Click to expand...

It turns out that rather than leaving fields bare, planting fields with shallow-rooted crops, such as corn and teff, in between wheat harvests has myriad advantages. The direct benefits include more economic success for farmers due to increased crop harvests, as well as improved soil health thanks to the stabilized, nutrient-rich topsoil, which would otherwise be eroded by the wind – think Dust Bowl. But the indirect benefits are even cooler (pun intended). The increased crop-cover absorbs, rather than releases, carbon dioxide (a greenhouse gas); it cools the region in late spring; and it increases atmospheric moisture. This additional moisture leads to higher rainfall during crucial months of the growing season. To put it simply, farmers altered their land use to increase income, which caused a change in local climate that counteracted the human-caused warming trend.
Click to expand...

Explanatory graphic and text from the article: Convective precipitation occurs when there is sufficient energy to lift water vapor from the ground to the part of the atmosphere cold enough for it to condense into clouds. In the Great Plains, increased crop cover in late spring and early summer results in increased atmospheric moisture, because when plants need to cool down or obtain carbon dioxide for photosynthesis, water molecules escape in a process called evapotranspiration. With hundreds of miles of plants across the plains, their collective evapotranspiration increases the likelihood of rainfall by convective precipitation.
Click to expand... 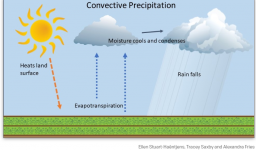 Read the story at: https://massivesci.com/articles/farms-climate-change-crop-rotation-rain-fallow/

The first time I heard of this happening was through a talk by Alejandro Carrillo from Understanding Ag. When he mentioned that our agricultural practices can modify the local climate I thought he was joking! But then I started looking into it and it turns out, there is evidence to support it! Check out some case studies on Understanding Ag.
You must log in or register to reply here.
Share:
Facebook Twitter Reddit Pinterest Tumblr WhatsApp Email Share Link