Regenerative Grazing Revolution Is Taking Root in the Mid-Atlantic

There's so much to celebrate about this article by Lisa Held in Civil Eats!

Farmers are scaling up the practice [of regenerative grazing} in Maryland, Pennsylvania, and beyond—and it could simultaneously help clean up the Chesapeake Bay, mitigate climate change, and save small family farms.
Click to expand...

The Chesapeake Bay Foundation (CBF) has been at the center of those efforts for years. In February, it released a report called “Farm Forward,” outlining how farms in the watershed can participate in improving water quality and mitigating climate change while also building economic resilience. And while the foundation included information on other practices—including buffers that farms plant along streams to prevent water pollution—it chose to zero in on the potential of regenerative grazing.

“We thought it would be a good time to highlight that . . . getting our farmers to help clean up the Bay actually has all these benefits for climate change and for the farmer’s bottom line,” said CBF Director of Science and Agricultural Policy Beth McGee. “There are so many dual benefits.”

CBF’s goal is to make a case for more funding for regenerative grazing at a time when the Biden administration is making promises around climate action and negotiations related to the next farm bill are beginning.
Click to expand... 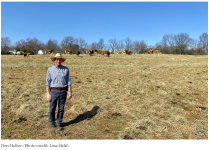 Fantastic! Ron Holter's Maryland farm was highlighted recently in NCAT's new toolkit How to Reduce Synthetic Fertilizer Use, where its mentioned that he manages his 150-cow seasonal dairy on grass alone, with no supplementary grain, and has been free of synthetic fertilizer since 1995!

Wow, think of the great gains in profitability and great reductions in greenhouse gas emissions on Ron Holter's farm -- it makes me want to cheer! Like on that TV show years ago where a character was always saying, "I love it when a plan comes together!" Thanks for sharing, Lee!

Oh yes! And recently, we posted ATTRA's 250th podcast on Practical Steps for Reducing Synthetic Fertilizer Use. I spoke with Emilie Saunders, NCAT Communications Director and Nina Prater, NCAT Sustainable Agriculture Specialist about the new toolkit, and the easy-to-follow steps for transitioning away from synthetic fertilizer use.