What is the best forage mix for pastured poultry?

KM wrote to me recently after attending session I of the Advanced Grazing webinar and is interested in the percentages of each forage species that should go into a pasture mix for chickens on pasture. I put together a letter and thought Soil for Water folks might be interested as well...

The percent composition for each forage species in a pasture sward for chickens in a rotational grazing operation is highly variable, as farmers and researchers have various ideals based on experience. Perhaps less important than the percent composition of forage species is the diversity of the pasture sward. Poultry on pasture obtain nutrients from the weeds, weed seeds, legumes, grasses, and insects available in the pasture. There is some debate as to how much pasture-based nutrition the birds can digest and assimilate. Unlike ruminants, chickens lack a multi-compartmented stomach and cannot efficiently digest cellulose. Therefore, chickens cannot live on pasture alone (Bare and Ziegler-Ulsh. 2012).

Joel Salatin, author of Pastured Poultry Profits, grows what he calls a “permanent polyculture.” He uses a mix of grasses and clovers, including broadleaves, chicories, oats, and rye. He suggests keeping grass short, to a few inches in height, as this helps the birds to ingest more forage (Bare and Ziegler-Ulsh. 2012). The main goal should be to provide the birds with a mix of young forages that give them a broad, diverse spectrum of necessary, digestible nutrients (Ottinger, 2017).

Jeff Mattocks, a poultry nutritionist at Fertell, says that modern broiler breeds have very little desire to consume plant vegetation. However, when provided with high quality forage, he has observed as much as 20% of the diet intake from forage. These observations are mostly noted on forage such as clover and alfalfa. It appears that they much prefer legumes. Forage consumption based on a mixed sward varies from 5-20% of the total diet. With years of data from producers, he has concluded that pastured poultry eat 5-20% pasture, depending on type and age of poultry and quality of forage growth (Mattocks, 2002).

Different breeds of poultry have different foraging habits and consumption rates. Clovers and alfalfa have long been considered among the best forages for a variety of reasons, such as high protein content, lush leaves, perennial growth, and, importantly, the palatability of legumes versus grasses. Grass leaves on average contain twice the fiber of legume leaves (Spencer, 2013).

Diverse pastures rarely need to be augmented with planted seeds. A pasture that’s “weedy” may be pretty decent for pastured poultry as long as it does not grow too tall. Periodic mowing can help provide access to good forages for the birds. Some of the plants often found in pastures such as amaranth or pigweed (protein and minerals), young, green grass (vitamins), dandelions (nutritional profile similar to alfalfa), and various clover species (20-28 percent protein) can be adequate for growing birds that have access to a complete grain ration (Ottinger, 2017).

Given these thoughts there is no universally recommended percentage for species composition in poultry pastures. Farmers will give you various percentages based on their own experience. However, it seems clear that a mix of mostly legumes with various forbs and grasses maintained in the vegetative stage works best. 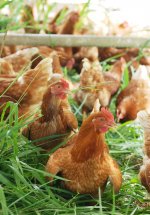